Let's talk about race. It's still showing up often in the circles I visit, and I love that. Change can't happen if momentum dies, so let's keep it going.

Since the murder of George Floyd, I have been watching, listening, and dipping my toes into the discussion on my private Facebook account, and now I think I'm ready to say something here.

I don't like to get political here. I don't want anyone to feel like they are being attacked or singled out--nor do I want to create an atmosphere of tension or cause arguments in the comment section. I want this to be a safe place to escape and enjoy a good story. So I'm not going to talk about politics, and I encourage you, reader, to stay on the same page as me--at least here on a webcomic. Let's talk about ourselves, and let's talk about the real people we know. Let's talk to each other and listen, and let's ask "I wonder why they feel that way" before immediately disagreeing with someone. It's likely that everyone here wants the same things: equality, justice, and peace--so let's look for that common ground as often as possible and meet as friends.

One thing I've learned from all of this is: speaking out is a risk, but staying silent in moments of great importance is closer to cowardice than anything else. I'm not directing that at you, reader; that's the timidity I'VE been facing. "What if I say the wrong thing?" "What if this ruins my professional image?" It's easier to not say anything at all, so often I don't. But it's way, way, way more productive to gather your best intentions and say SOMETHING. There may be negative backlash... But I'm realizing I have to look at that potential backlash and accept it as a possibility, and then speak out anyway because what's at stake is too important to stay silent! I may very well say something wrong, but please bear with me, forgive me, and gently correct me if I do.

I want to say something about race in the context of my occupation. As a visual storyteller, race is something I'm confronted with every time I create a character: human characters need a race, even if it's an ambiguous, Earth-detached one. I strongly believe in responsible authorship that is accountable for the messages conveyed in creative media. If the way I create my characters perpetuates damaging stereotypes, even if I am totally oblivious to that due to my own ignorance or privilege or whatever else--I am harming the world!! That's terrible! I don't want to do that, and it's a real pressure on me as a storyteller to do my best to avoid that. Even my best, though, is probably not going to be enough, and I know I have already failed. Is it sending a bad message that the hooligans who attack West in chapter 4 are darker-skinned than him? Is Mrs. Pickford an echo of the "mammy" stereotype?

I didn't even know about this stereotype until yesterday with the news about Quaker Oats retiring the "Aunt Jemima" brand. Yes--maybe this stereotype has been embedded into my mind for years and is now resurfacing (partially and subconsciously) in my fictional work! I hate that, but I take responsibility for it because I'm the one who wrote these characters. I need to do better when it comes to how I handle race. You can hold me accountable for that. If you come to me privately and tell me, "Mrs. Pickford is problematic," I believe it's on ME to seriously, seriously take that to heart and figure something out. I don't want to harm the world with my work, even in a "small" or unintended way. The thing is--I can't achieve perfection, right? I could try redrawing entire chapters of the comic (which would set the story back years) and still get it wrong due to all the biases I still haven't rooted out of myself, because there are probably a ton I'm not even aware of.

It's no secret, of course, that Exvulnerum's current 3 main characters are white or pass as white. Here's my ugly secret: every single time I create a character, they are instantly white in my head unless I purposefully decide to change that. Why is that? I don't really know. It is definitely not a conscious preference for white characters, because I love it when a story focuses on or introduces characters of other races. Zoe, the mysterious character visible on the back cover of the first page, is probably my favorite character in all of Exvulnerum, and I wanted her to be black, so she is... but she started out as white, too, and I even have that documented in my character concept sheets! It's so crazy to me, now that I'm actually typing it out. Everyone is white unless I "force myself" to diversify. Coach Cotton up there? He was white. (Not that I ever drew him that way; he was just white as I visualized him in my mind when writing this chapter's script.) The catcher, Roman? Also white--originally named "Marvin." This is crazy, isn't it??? Is it a problem with me? Is it a problem with the sum total of media I've been exposed to and/or chosen to consume in my life? Because it is a problem! Amathae isn't Earth; this isn't historical fiction set in a time and place where everyone has to be the same race, and it's been my intention to include no skin color-based discrimination in the story! (Except, I guess, this, heh.) So it's a problem that ALL of the current main characters are white despite all that. It's narrow-minded, less creative, and exclusionary--on top of a host of other problems I only partially understand.

So what's my point? I'm not trying to tear down other creators who have a cast as white as mine. I'm not trying to cover my butt, because I think I just opened up a can of worms mentioning Mrs. Pickford. All I want to do is share my thoughts and let non-white readers know: I care about you, I want you to feel included and heard and represented in a worthy and positive light, and if I have let you down in regards to that in the past, I am sorry and take responsibility. What can I do better? If you are generous, I welcome you to come to me and let me know where I am failing, and I will try to do my own self-reflection too. My hope is that--working together, listening and learning--this story will be the best it can be while doing the least amount of harm. And I care about you, reader, more than in the context of Exvulnerum. If you're a black comics artist, I would love to connect with you, either peer-to-peer professionally--or for new artists, as more of a supporter or mentor (if you think you can be helped by me, which may or may not be the case).

But I also want to underline that my wall of text here is just a creative-based offshoot of the root discussion on race which focuses on life-or-death issues. I am not trying to eclipse the more serious issues, so please keep listening to those voices who are speaking out about other things. If you have garbage biases, ROOT THEM OUT. I encourage you to listen and to act: with your words and with your wallet. We can help change happen one act of kindness at a time. 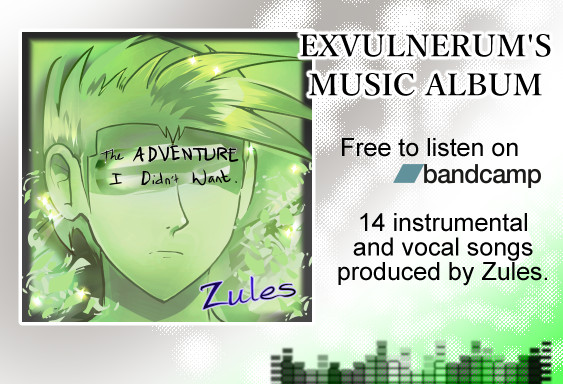 Talk about this page on other websites with hashtag #Exvulnerum765